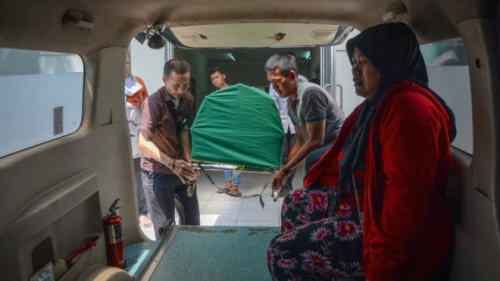 At least 45 people have died and dozens more are being treated in hospitals in Indonesia after drinking illegally produced alcohol.
The death toll is likely to rise, with fatalities recorded in several provinces in recent days, police said.
Spirits bought on the black market in the Muslim-majority country can contain lethal amounts of methanol.
Police are conducting raids on properties across the country and at least nine people have been arrested.
Some 100 people are believed to have consumed the bootleg alcohol, police said on Tuesday, with many of them in critical condition in hospital.
The deaths were recorded in Indonesia's capital, Jakarta, West Java and in the eastern province of Papua.
Authorities in Bandung, a major city in West Java, and its surrounding area east of Jakarta have declared a state of emergency, AFP news agency reports.
It is the country's worst liquor poisoning crisis in years.
Indonesia's commercial alcohol producers separate the methanol from their products, as it can be fatal in even tiny amounts.
It is not the first time, however, that bootleg liquor has claimed lives in the poorly regulated markets of Indonesia.
In 2016, at least 24 people died after consuming spirits sold illegally and made from ethanol, water and fruit.
At New Year celebrations in 2014, more than a dozen Indonesians died after drinking a similar cocktail.
©  BBC News, 2018
.