Founded in 1974, Aimpoint has grown to become the premier manufacturer of red dot sights in the world with a well-earned reputation for producing optics that will not fail on the battlefield. The Comp M5 is Aimpoint’s latest offering. I was very lucky to be able to get a test optic. Aimpoint has been very busy fulfilling contracts to various government agencies. Once it arrived, I proceeded to begin testing in the Sub-zero conditions of Northern New England. The M5 came in a well packed small box with the battery already installed. After reading the manual, I installed the optic on a stock 6920 Colt. The test optic came with a 39mm riser and LRP QD mount. The QD mount attached to the 1913 rail quickly with no movement of the optic once locked in. The M5 is powered by one AAA battery. Aimpoint states one battery should power the optic for 1 year on position 8. The Comp M5 has six settings for daylight and four for use with NVDs. The M5 is compatible with Aimpoint’s 3X and 6X magnifiers.
. 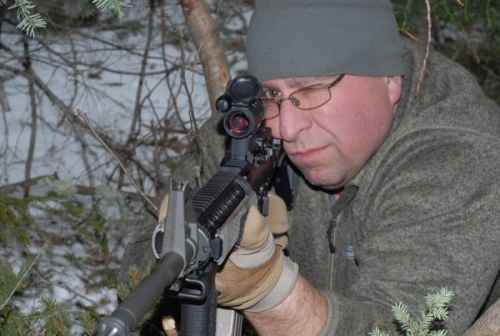 With an unlimited eye relief, shooters should have no issues setting up this optic on their weapon. The optic and mount are constructed from high strength aluminum in matte black. The housing is anodized, overall weight of the optic and mount is 8.4 ounces.
The M5 only required one small adjustment to zero for 100 yards. I found the 2MOA dot very easy to acquire with both eyes while shooting ready up drills at CQB distances. The dot was also fast to reacquire while shooting controlled and hammer pairs. Shooting at 100 yards, I consistently hit the steel, while practicing the fundamentals of basic marksmanship.
.

.
I decided to see how the Comp M5 would perform in cold weather. Temps ranged from below zero to 40 degrees, which is typical New England weather. I was not gentle with the optic and treated it like an Army Private would. When not mounted on a weapon, the optic was either in water or in the freezer. The M5 is submersible to 150ft. Unfortunately I could not test that feature. At no time during testing did water or cold affect performance. While out hiking and shooting, the optic got banged around quite a bit. To see how well it would stand up to shock, I mounted the M5 to a KSG and fired 30 rounds of 3” magnum.
After mounting it back on the 6920 and shooting, I found the M5 held it’s zero. It is nice to know that under rough handling and adverse weather conditions, the Comp M5 won’t let the user down.
I was able to borrow some NVDs to try out the M5’s night settings. The dot was very easy to pick-up, and at the highest setting did not wash out the NVDs. I consistently hit the target with the M5, and to be honest it felt like cheating.
Would I recommend the Comp M5? That is up to prospective end users to assess what their specific needs for an optic might be first. Yes, I would recommend the Comp M5. It met my standards in accuracy, durability and ease of use. The M5 took all the punishment I could heap upon it in a short period of time and never lost it’s zero. The use of a common battery is a big plus for end users in my opinion.  The quality and attention to detail in production justifies the price of this optic. You get what you pay for. The M5 in my opinion is worth every cent, buy once cry once.
.