First Lady Melania Trump has defended this year’s White House stark tidings.
“Everybody has a different taste,” Melania Trump said.
Speaking at a town hall conversation at Liberty University, the first lady was referring to her White House Christmas decorations and the kerfuffle they caused. Particularly the red topiary trees lining the East Colonnade. The entire nation has come to know the phrase “blood red,” as it became the stuff of late-night monologues.
It turns out taste these days — in Christmas decorations, at least — can be a litmus test for a person’s politics and how they feel about the Trump administration. Not even garland, string lights and candy canes are above partisan squabbling.
. 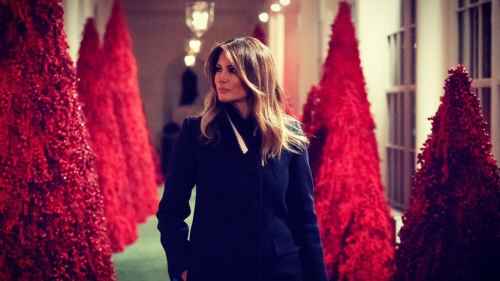 Ms. Trump’s decorations, which also included “Be Best” pencil wreaths and tree stands (a nod to her childhood-wellness campaign) as well as gingerbread replicas of the Capitol, the Lincoln Memorial and other national monuments, could be seen as either “stunning” and patriotic (the Washington Times) or “deeply haunted” (The Cut). It was the rare media outlet that played it down the middle, as did Town & Country, which tactfully called the red trees: “Most striking, perhaps.”
It was a design choice ripe for armchair internet analysis.
. 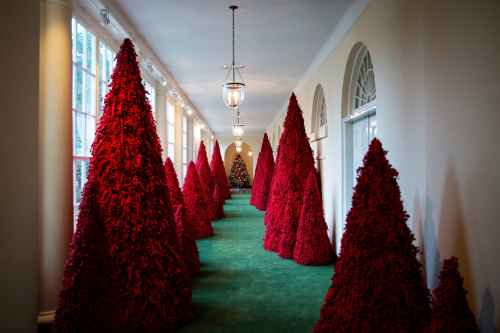 .
Twitter lit up with memes likening the trees to the costumes on the dystopian TV series “The Handmaid’s Tale.” The Washington Post published three articles about the decorations, none flattering, including one that explained that in Ukraine, red trees symbolize the nuclear destruction of forests around the Chernobyl site. The Guardian newspaper asked, “Is Melania Trump sending us a message through her creepy Christmas trees?” With her unnatural color choice, the writer suggested, Ms. Trump may be “trying to separate us from nature.”
Ms. Trump is not the first first lady to face bah humbugs. In 2005, when Laura and George W. Bush sent out cards wishing supporters a happy holiday season, they received complaints for omitting the word Christmas. In 2009, and for years afterward, a false rumor circulated that the Obamas were doing away with the White House Christmas tree altogether.
Still, for some the critiques of Ms. Trump were a yule log too far.
“It seems a little mean-spirited,” said Kate Andersen Brower, of the criticism of Ms. Trump’s decorations. Ms. Bower, who has written several inside-the-Beltway nonfiction books, including “First Women,” about modern first ladies, continued: “I’m sure it never occurred to her the color was like ‘The Handmaid’s Tale’ costumes. I do think the blood red is a bit intense. But she is very high fashion. She finds it beautiful.”
The problem, she conceded, is that, Christmas at the White House is about the potential for cozy, heartwarming photo-ops, and the Trump administration is perhaps better known for battles on Twitter than glitter.
There are ways to soften the first family’s image, especially around the holidays, Ms. Andersen Brower said. “The Obamas didn’t need the dog,” she said. “Michelle Obama writes that they would use the dog for photos when they didn’t want their girls in front of the cameras.” Raising children in the White House, which was true of the Obamas, Bushes, Clintons and Trumps, can also be its own asset, with staged photos of a tiny tot trimming the tree.
.